This week’s work summary is once again focused on the offside frame.  The panel to the immediate rear of the front wheelarch was removed  to enable frame repairs to continue; this included the step ironwork for the cab entry.  All the side-rod lower extensions have been removed, a small amount of heat being required to release the the through bolts that pass through the ends of the floor bearers.  Exposed metalwork above the floor line had been treated with Vactan.  A removable section of the frame around the fuel tank filler has been unbolted to allow access to other parts that needed to be replaced and to allow easier removal of the fuel tank.

All of the window verticals and the waist rail have now been dowelled and all rust screws and nails hopefully removed.  The horizontal rail above the windows remains to be finished and painted.  The new woodwork of the wheelarch frame has been painted, along the with the sections of the frame joints that are awaiting new flitch plates.  The remaining flitch plates,  including the wheelarch reinforcement have been made this week and are in the process of being painted ready for fitting.   I also removed the beading above the (incorrect) cab mudwing.  I had hoped to save this and reuse it but at first sight it appears too far gone. 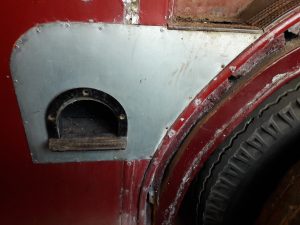 The lack of recent posts belies the basic monotony of current work on the offside frame.  Mostly it has been the removal of rusty screws and nails from the frame above the floor line. This has progressed as far as the cab door and is virtually complete in terms or plugging screw and nail holes with dowels.  The horizontal framing above the window openings has received some new timber to replace the odd bit of wet rot but this needs further attention and screw removal before it is finished.  An emerging fact is the offside frame has been much less carefully finished than the nearside; stupidly long screws and large nails have been used to fix the panels. On the positive side, above the floor it is generally in good condition.  The rear wheelarch has been repaired with new timber exactly as it was and naturally this is quite different from the nearside.  The next job when the upper frame is complete will be removal and refurbishment of the fuel tank, which appears to be the wrong tank. 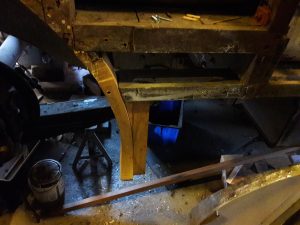 Restoration diary of a 70-year old AEC single-deck bus and the trials, tribulations and adventures of our 1966 Bristol bus.